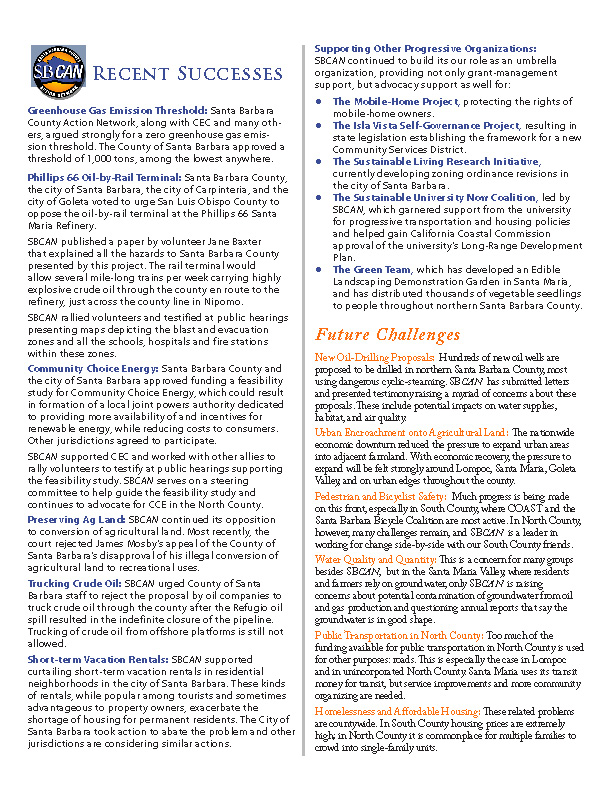 Click below for the text version of this information

Greenhouse Gas Emission Threshold:  SBCAN, along with CEC and many others, argued strongly for a zero greenhouse gas emission threshold. The County of Santa Barbara approved a threshold of 1,000 tons, among the lowest anywhere.

SBCAN published a paper by volunteer Jane Baxter that explained all the hazards to Santa Barbara County presented by this project. The rail terminal would allow several mile-long trains per week carrying highly explosive crude oil through the county en route to the refinery, just across the county line in Nipomo.

SBCAN rallied volunteers and testified at public hearings presenting maps depicting the blast and evacuation zones and all the schools, hospitals and fire stations within these zones.

Trucking Crude Oil: SBCAN urged County of Santa Barbara staff to reject the proposal by oil companies to truck crude oil through the county after the Refugio oil spill resulted in the indefinite closure of the pipeline. Trucking of crude oil from offshore platforms is still not allowed.

Short-term Vacation Rentals: SBCAN supported curtailing short-term vacation rentals in residential neighborhoods in the city of Santa Barbara. These kinds of rentals, while popular among tourists and sometimes advantageous to property owners, exacerbate the shortage of housing for permanent residents. The City of Santa Barbara took action to abate the problem and other jurisdictions are considering similar actions.

Supporting Other Progressive Organizations: SBCAN continued to build its our role as an umbrella organization, providing not only grant-management support, but advocacy support as well for:

New Oil-Drilling Proposals:  Hundreds of new oil wells are proposed to be drilled in northern Santa Barbara County, most using dangerous cyclic-steaming. SBCAN has submitted letters and presented testimony raising a myriad of concerns about these proposals. These include potential impacts on water supplies, habitat, and air quality.

Pedestrian and Bicyclist Safety:  Much progress is being made on this front, especially in South County, where COAST and the Santa Barbara Bicycle Coalition are most active. In North County, however, many challenges remain, and SBCAN is a leader in working for change side-by-side with our South County friends.

Water Quality and Quantity: This is a concern for many groups besides SBCAN, but in the Santa Maria Valley, where residents and farmers rely on groundwater, only SBCAN is raising concerns about potential contamination of groundwater from oil and gas production and questioning annual reports that say the groundwater is in good shape.

These related problems are countywide. In South County housing prices are extremely high; in North County it is commonplace for multiple families to crowd into single-family units.